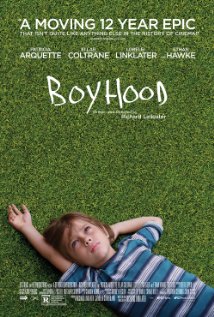 This movie represents a grand experiment in film-making. Writer/Director Richard Linklater [IMDB] gathered a cast and committed to an unprecedented 12-year filming schedule. During that time we experience the growth of Mason, a young boy (Ellar Coltrane [IMDB]), from age six to 18.

The question, of course, is: did the experiment succeed?

The answer is more complex than you might expect. In one respect it can only be considered a resounding success: the movie is very good. The title – rumored to be a last minute change – is misleading. The story focuses on the entire family and not just the boy. The unnamed mom’s (Patricia Arquette [IMDB]) poor taste in men provides much of the available drama. A single parent, she’s also, as you might expect, the driving force behind much of the plot.

Well-meaning, but flighty, Dad (Ethan Hawke [IMDB]) and strong-willed sister Samantha (the director’s daughter, Lorelei Linklater [IMDB]) are given nearly as much character development as the titular boy. It seems almost insulting to these many worthy performances to focus the title completely on “the boy”.

The movie is successful simply considered as a slice-of-life family drama. The characters strike that necessary balance between good enough to care about and flawed enough to be interesting. You’ll celebrate their good decisions and cringe at their poor ones. Tension is built from the everyday challenges of life and released with the everyday joys of life.

The success of the 12-year production schedule is more difficult to quantify. There’s definitely a strange power in seeing people, especially the children, actually age before your eyes. At the same time, with the exception of the children, all of these actors are exactly in that slice of life where there’s simply not much going on age-wise. All of the adult actors could have easily met a more traditional schedule just as effectively with some quality make-up work.

A more traditional schedule would have obviously meant using multiple children for the roles of Mason and Samantha. While this is risky, it’s absolutely something we’ve seen done successfully before. Both of these young actors put in excellent performances, but neither provides anything so utterly unique as to demand this kind of extended schedule.

That said, the schedule definitely doesn’t seem to have hurt. It’s just difficult to see it as game changing as the hype might have you believe. Regardless, this is an excellent, engaging family drama featuring many amazing performances. If the gimmick gets asses in seats, so be it: they won’t be disappointed.