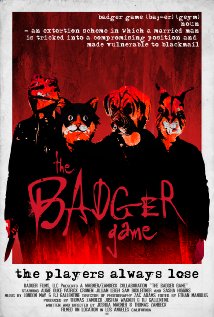 “The Badger Game” on IMDB

[Disclosure: I reviewed a screener of this film provided by the filmmakers. No other considerations were made.]

Last November, on our sister site MoreBrains.com, I reviewed a rare thing: a clever, low-budget horror movie. “Mimesis” was a zombie-less zombie movie that impressed me on multiple levels. I spent more time than I should have picking on its overly academic title. When the screenwriter, Josh Wagner [IMDB], asked me to review his latest effort, co-wrote and directed with Thomas Zambeck [IMDB], I jumped at the chance.

Again we get a movie with an inscrutable title, but this time they’ve added the definition right there on the poster. “The Badger Game” is a grift where a married man is tricked into a compromising position and blackmailed. Again, the title title doesn’t totally fit because our target, Liam (Sam Boxleitner [IMDB]), doesn’t need to be tricked: he’s as big a cheater as they come.

Apparently, we just have to suffer these strange titles in order to see the excellent movies behind them.

The plan is half-baked and full of holes and the group is almost immediately thrown into panicked damage control; just as you’d expect from a bunch of nervous amateurs. As the situation spirals further out of control loyalties are tested, secrets are revealed and hidden motivations surface.

These stories often compromise their characters or, in the worst cases, commit terrible sins of coincidence to force the plot forward. It’s a common trap that this avoids almost completely. The plot moves organically and realistically towards the conclusion and the characters retain a sense of themselves throughout. Much of the success in this is owed to the small, but capable cast.

Technically there’s little to complain or rave about. Poor lighting hurt many scenes, but never fatally. There were occasional sound quality issues. The camera work and staging were straightforward and effective, if a bit dull. The few, thankfully all practical, special effects were handled well, including an impressive, stomach-turning sequence where somebody is, for lack of a better term, “weaseled”.

The story does begin to stutter at the end, but wisely winds up before it stalls completely. A major plot element regarding Kip’s intentions is either cleverly inferred or ham-fistedly ignored, but I honestly couldn’t tell which. The ending itself is messy and ambiguous, just like the scheme our novice criminals put together, yet still satisfying.

Good performances of notably solid, consistent characters raise this above other genre films. As you’d expect, problems are often directly related to the (lack of) budget. These are also the problems that are most easily forgiven. Once you do, you’ll be rewarded with a smart, surprisingly grounded, well-executed thriller.