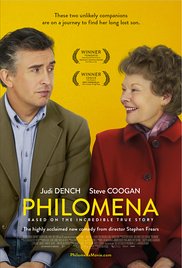 In the 50’s and 60’s the Irish Catholic Church declared war on unwed mothers; debauched sinners, unfit to raise children. Philomena Lee, pregnant and unwed at 18, was sent by her pious father to a convent where she was forced to sign a contract relinquishing all rights to her child. She, and thousands like her, spent three years caring for their children while working without pay to reimburse the church.

Their children were offered up for adoption to wealthy families for enormous fees. The girls, after their period of service, were released to make their ways as they could. They were told that speaking about their “guilt” would bring them damnation. Philomena kept her silence for over 50 years before she admitted to her family that she’d had a son and wanted to find him. She eventually ended up working with writer Martin Sixsmith to find him. The movie, based on his 2009 book, tells the story of their search.

Sixsmith, played by Steve Coogan [IMDB], is world-weary and slightly elitist. He’s flawed and often difficult to like, yet ultimately solid and supportive. Able to win the trust and empathy of the audience, he becomes our imperfect, but well-meaning, avatar.  Philomena, played by Judi Dench [IMDB], is easily dismissed early on as naive and provincial; even somewhat simple. Through the power of Dench’s performance, she projects a subtle, but consistent, inner strength and easily evolves into the primary driving force of the film.

Many commentators have denounced the story out of hand as aggressively and overly anti-Catholic. This couldn’t be farther from truth. The movie easily could have been a polemic against the Catholic Church, considering the events depicted, yet shows remarkable restraint. The story is kept close and personal, implicating only those directly involved rather than (however justifiably) extending its reach further.

The audience, like Sixsmith, may suffer from a notable lack of catharsis. The movie isn’t a feel-good story about one woman triumphing against a closed, monolithic organization. It’s about deep regret, loss and the reclamation of spirit. The audience is invited to join in Philomena’s search, but isn’t granted any consideration beyond that. This is her story, and it ends as she wants it to, not as we do.