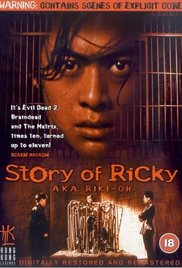 “Riki-Oh: The Story of Ricky” on IMDB

25 years ago a team of professional filmmakers came together. Actors, directors, cameramen, special effects and sound crews, set dressers and many others. They had a vision.  A vision they were willing to sacrifice for. That dream became a mission. A mission they were willing to suffer for. This movie, the result of their sweat, blood and sanity, is the result of that mission.

Based on the ultra-violent, Kung-fu Japanese Manga “Riki-Oh”, the movie is built on a familiar story. Riki’s girlfriend is (kinda?) killed by a local drug dealer and he takes revenge. For his crime he’s sentenced to prison which, in the far-flung future of 2001, is a corrupt privatized institution. There, he pits himself against the gang leaders and wardens in defense of his fellow prisoners.

That’s the story, but you’ll have to piece most of it together by yourself. The movie doesn’t give two shiny shits what you think.

Luckily Riki was taught Qigong Kung-fu by his insane uncle. This consisted mostly of him being pelted with headstones from the local cemetery. It made him superhumanly strong and able to withstand any punishment. He can (and does) punch through doors, walls and, yes, people. Unluckily, as fate would have it, the gang leaders and wardens are also Kung-fu masters.

The events portrayed are ridiculous. Ridiculously awesome. This is a movie in which (spoilers):

The special effects are simultaneously some of the bloodiest and some of the silliest ever put to film. Rubber suits, clay busts, piles of butcher-shop left-overs and barrels of fake blood all work in harmony to create continuous – and hilarious – over-the-top mayhem.

Distractions like “character development” or “motivations” are left offscreen. Ricky promises to avenge people he’s never met. Some guys play leaves like harmonicas and bond over it. Characters change personalities on a whim. Hell, they change shape on a whim!

What makes it all work is the complete and total sincerity. This movie is serious and that makes it all the more hilarious. This is nothing less than the ultimate party movie.