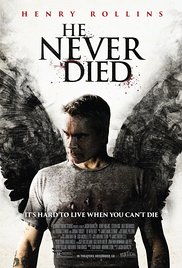 “He Never Died” on IMDB

[Some films simply can’t be discussed without exposing something. This is one of them. They will be kept to a minimum, but there will be spoilers ahead.]

Immortality can be such a drag. It’s completely understandable that after five or six millennia you might get understandably tired. Henry Rollins [IMDB] plays Jack, a quiet guy who’s worked himself purposefully into a dreary, mind-numbing rut. The story is light on explanation, but it’s implied that Jack may become unpredictably violent should he cater to his unusual tastes.

Instead, he spends his days working to eliminate excitement. He sleeps most of the time, rousing only to eat the same bland meals at the same diner and play church basement Bingo. Those around him find him enigmatic and, for his regular waitress (Kate Greenhouse [IMDB]), alluring. Jack remains polite, but quiet.

Casting Rollins was a stroke of genius. Jack’s character is diametrically opposed to the impassioned intensity we’re used to from Rollins. His performance is amazing, effective and brilliantly subdued. Jack isn’t simply bored of life, he’s visibly weary of it. Bone weary. His speech and mannerisms, even when threatened, are slow, direct and dripping with exasperated apathy.

When threatened by thugs with a gun, for example, he sinks disinterestedly to sitting. As the befuddled gunman attempts to press his position, Jack half-heartedly slaps the gun from his hand. This isn’t a badass move to control the gun. Jack barely touches it and doesn’t stop the thug from retrieving it. His attitude is pure boredom. He removes it sloppily, lazily; as a dying man might swap haphazardly at a fly.

As expected, people and events from his past appear and conspire to drag Jack out of his self-imposed shell. His initial interactions with them are some of the most inspired work in the movie. When called by an ex-girlfriend he answers in an emotionless monotone, “Why are you calling? I hate you.”

Like many concept pieces, the script struggles to maintain momentum. The story ends predictably, but honestly without the ridiculous, self-indulgent twists that have become par for the low-budget course. Explanations are made, but they’re brief and more enigmatic than illuminating. You will learn who Jack is, but are likely to be left wanting more.

It may ultimately trail off, but it’s a hell of a fun ride getting there. The first act presents one of the most meaningful, understandable views of immortality ever seen on film. The quality of Rollins’ performance and novelty of the ideas easily carry the film.