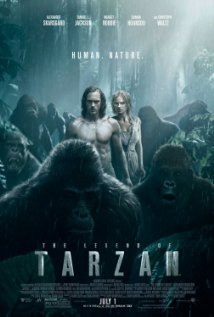 “The Legend of Tarzan” on IMDB

Fans of Edgar Rice Burroughs Tarzan stories have a rough row to hoe with modern interpretations of the character. Johnny Weissmuller’s [IMDB] primitive portrayal in the 1930’s set specific, but utterly incorrect, expectations of a grunting man-brute. A characterization that’s since been parroted repeatedly by hollywood.

Disney’s 1999 “Tarzan” [IMDB] may be the best known version today, but was even more simplistic than Weissmuller’s. 1981’s “Tarzan the Ape Man” [IMDB] was a hot mess of oversexed melodrama. Other versions, such as the forgettable 2013 animated film “Tarzan” [IMDB] and the quickly cancelled 2003 TV Series [IMDB], brought the character to modern times while doing little else of interest. 1984’s ungainly titled “Greystoke: The Legend of Tarzan, Lord of the Apes” [IMDB] may have been the most faithful adaptation to appear, but was sadly dark and joyless. It held promise, but failed to capture Burrough’s sense of grand, high adventure.

This current adaptation solves many past problems by all but eliminating the well – if wrongly – known origin story. Tarzan (Alexander Skarsgård [IMDB]) has made the transition to John Clayton, Lord Greystoke and has taken his rightful place among English nobility. He and his lady, Jane (Margot Robbie [IMDB]), are living a quiet – perhaps too quiet – life on his vast estate outside London. He’s declined an invitation to return to Africa by Belgian King Leopold, who now has control of the Congo.

A simplified version of his childhood is told through flashbacks. The well-known notes of the story are all struck. The tree house, the death of his mother after his birth, the death of his father at the hands of the ape, Kerchak, and his subsequent adoption by the ape, Kala. It’s an effective piece of storytelling, but may disappoint fans hoping for the depth of Burrough’s original narrative.

Tarzan is convinced to accept the king’s invitation by George Washington Williams (Samuel L. Jackson [IMDB]), an American. He fears that the Belgians, led by the king’s envoy, Leon Rom (Christoph Waltz [IMDB]), have reinstituted the slave trade to pay the crown’s debt. Rom, for his part, is obsessed with obtaining the legendary diamonds of Opar, held by a tribal war chief with a blood grudge against Tarzan. Waltz may risk typecasting with yet another charming villain role, but doesn’t disappoint.

The story involves the requisite kidnapping and subsequent rescue of Jane. It’s remarkably successful in evoking Burrough’s signature brand of adventure. Derring-do, heroic acts of strengths and dogged sacrifice in the name of true love. The beautiful cinematography captures the emotional heart of the classic landscapes. The dense, foreboding jungles of the gorillas, the shattered volcanic waste of Opar, and overgrown rivers and streams, teeming with danger.

As has become standard, most of the animal scenes are computer generated. For the greater part they are very well done. Gorillas, lions, elephants, panthers, hippos, crocodiles and several others are all well represented. There are moments, especially where CGI interacts with live actors, that the illusion fails to hold up. These are rare and forgivable, but noticeable nonetheless.

Tarzan is one of the first modern superheroes. Burroughs described him in terms of Roman gladiators and Greek gods. He taught himself to read using discarded primers, had an uncanny affinity with languages of all kinds, and an unwavering morality. His strength was legendary. He was the pinnacle of human capability and achievement; without flaw.

Skarsgård embodies the noble savage wonderfully. His intensity and sense of purpose is paired well with a charming, little seen, playfulness. After seeing him in the role, it’s difficult imagining anybody else owning it as fully or as well. Through little fault of her own, Robbie’s Jane is less memorable. Tarzan stories, after all, had little use for women beyond damsels or titillation.

Which raises the major question: do modern audiences have any use for traditional Tarzan stories? The movie is grand and sweeping, but also slow and methodical by modern standards. The story is simplistic and predictable. It lacks the twists and surprise reveals that seem a requirement today.

Fans that have waited for a faithful adaptation of the Lord of the Jungle now have it. Whether modern audiences will embrace traditional high adventure remains to be seen. Those willing to embrace a simpler, more traditional adventure will be well pleased.