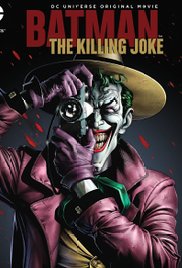 “The Killing Joke” on IMDB

Alan Moore and Brian Bolland’s 1988 graphic novel, “The Killing Joke” was considered the quintessential Joker story of the modern era. It became the definitive origin story of the character and starkly highlighted the depths of his depravity. More importantly, it delved more deeply than ever before into the dark, codependent relationship between Batman and the Joker. It remains, nearly thirty years later, one of the most influential stories in all of comics.

When the film adaptation was announced, expectations were high. Warner Bros. met them by reuniting what many consider to be the definitive cast. Mark Hamill [IMDB] as The Joker is joined by Kevin Conroy [IMDB] as Bruce Wayne/Batman and Tara Strong [IMDB] as Barbara Gordon/Batgirl. Casting these strong, veteran actors in their iconic roles set many minds at ease, as did Warner’s decision that this would be an unapologetically adult film; their first Rated R animated feature.

The original story is beloved, but it isn’t very long. To reach a feature-length runtime without altering it, Warner decided to bookend the main story with a nearly 30 minute prologue and a short, post-credits epilogue. These focus on Barbara Gordon (Batgirl) and her relationship with Bruce Wayne (Batman). While there are some very specific choices that could easily rub fans the wrong way, there are more general issues as well.

The cocky nephew of an old-school mob boss has decided to break into his uncle’s business. When he robs an armored car, Batman and Batgirl take the call. The kid becomes enamored with Batgirl and baits her with video messages. Mistakes are made and Batman takes her off the case.

Barbara’s conversations (mostly with her aggressively stereotypical gay best friend) are all about, with obfuscation, her relationship (or lack of one) with Bruce. Her interactions with and about him are immature, impulsive and bordering on obsessive. Considering his long-term impact on her life, this isn’t unexpected. It’s also not very interesting.

In one scene, she loses control and attacks a boyfriend berating his girlfriend. We know that the character is strong, physically. Demonstrating it adds very little. Sexualizing her adds even less. It’s common, but simplistic, to confuse an ability to kick ass or express sexual appetites as evidence of a “strong woman”.

The sequence extended the runtime as intended, but wasn’t itself given enough time to gel. It did very little expand on Barbara’s character. The attempts to do so are, at best, sadly clichéd; at worst they’re disrespectful. If given enough time, the blatantly inflammatory moments may have been tempered, balanced or explained. As it stands, they’re isolated and difficult to defend.

The prequel sequence ends definitively with an extended fade to black. It seems a safe bet that many fans will be fast forwarding through it.

The main adaptation, comprising about 45 minutes of the runtime, fares much better than the prologue. A new opening scene slots seamlessly into the story and provides context for the early events. Batman has come to Arkham Asylum in a somber effort to come to terms with his greatest enemy. He discovers that The Joker has, again, escaped and begins a search.

The Joker has decided to prove to the world that he’s simply a victim; a product of his experiences. That, if given the right prodding, anybody would become as mad as he is. He’s decided to test his theory with one of Batman’s closest friends, the straight-laced Commissioner Gordon. After committing heinous acts, he takes Gordon to an abandoned carnival where he and a gang of evil carnival freaks attempt to break him.

The story is interspersed with flashbacks that tell the origin of the Clown Prince of Crime. A failed comedian, unable to provide for his family, is drawn to a life of crime. These segments humanize the character and, ultimately, account for his appearance and madness.

The adaptation is exceedingly well done. With the exception of the opening scene and an extension of a montage from the book, most scenes and nearly all the dialog are pulled directly, without change, from the source material. Nothing is tempered or watered-down and many iconic images are lovingly rendered.

One segment that will likely attract attention is the song. In the book, The Joker taunts the imprisoned Commissioner with a song and dance number. For the movie this expanded into a full theatrical production. Music and choreography was added. It’s dark, depressing and set to a bouncy beat. While the animation has some problems here, Mark Hamill knocks this out of the park.

Speaking of the animation, it’s good, but varies wildly in quality from moment to moment. It’s done in the same style as the previous animated series and features. This is to say: decent storyboarding and character design, but the cheapest possible inbetweening from the cheapest possible Korean animation mills.  A few sequences are laughably poor. Terrible framerates and boneless, stone-faced characters. Most are fine. A few (too few) are very good.

Sound design fares much better. The movie enjoys a new, original score performed by a full orchestra. While there’s nothing technically wrong with a single musician piecing together a score from samples and synths, there’s something irreplaceable about a room full of musicians. There’s a sense of weight and of quality that’s indescribable, but undeniable.

Despite the many issues with the prologue, the adaptation is excellent. It honors the source material more than any other in recent memory. The performances by Hamill and Conroy are amazingly in tune with the story and the tone. Taken in isolation, even the most jaded fans should have little to complain about.