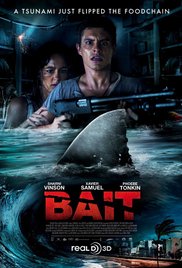 The movie comes out of Australia, which has been producing high quality genre offerings consistently for some time. Perhaps it’s simply that they’ve not yet become so jaded as to turn everything into a farce. Like a child who lacks confidence and pretends to pull a hamstring during gym class, we can’t face the risk of failure that comes from real effort. Instead, we wink, turn everything into a joke and say that it doesn’t matter. Australians, for whatever reason, seem more willing to say, “Hell, let’s give it a real go.”

No bones about it, this is a silly story. A Tsunami has struck the coast of Australia. It’s trapped a group of people in a supermarket. They’re stranded atop the shelving amid the death and destruction. Another, smaller, group is in a similar situation in the nearby garage. Both groups quickly realize that while there’s no way for them to get out, a couple of 12′ great white sharks (it’s always great white sharks, isn’t it?) have somehow gotten in.

The survivors, of course, are all balanced against one another to increase the drama. There’s the lifeguard whose partner and future brother-in-law was killed by a shark a year earlier. His former fiancee, whom he shunned due to guilt, has just shown up with her new boyfriend.

Silly, cliched story or no, the end result oddly works. The characters react as you might expect them to and the light-hearted moments arise naturally. There’s some fun “MacGyver” moments tossed in. The good guys get redemption and the bad guys get what they deserve. The acting is decent and the effects are passable (although you’ll quickly realize from all the stuff thrown at your face that this was meant to be seen in 3D).

It’s a throwback movie, in a good way. Man against nature… using groceries. It doesn’t matter that you’re more likely to be killed by a coconut than a shark (and that neither are very likely in a supermarket). The filmmakers took it seriously, so the audience is better able to.

Think of how good a movie about people in a supermarket getting attacked by sharks could be. The term “self limiting” comes to mind, doesn’t it? This isn’t a great movie, but it’s about as good as as it could be and sometimes that’s all you should ask for.