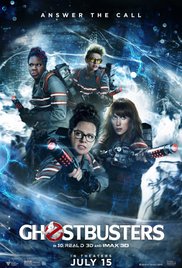 Addressing the first group: get over it. “Ghostbusters” was a great movie with an average sequel, but hardly sacrosanct.  Hell, according to MetaCritic, it isn’t even in the 10 top Bill Murray movies. To the second group: grow up. The pendulum is swinging so far that soon you may have to deal with perhaps as many as one in fifty movies starring women!

The women here are Kristen Wiig [IMDB], Melissa McCarthy [IMDB], Kate McKinnon [IMDB] and Leslie Jones [IMDB]. They’re all veterans and all do fine jobs, even if Jones was more stereotypical than original, but McKinnon, as the oddball engineering genius, steals every scene she’s in. Easily. Those few that are left are easily picked up by Chris Hemsworth [IMDB], who slips deftly into his role as the empty-headed receptionist.

The movie shines when it allows this group to spread their wings. The banter is crisp and sharp and plays to their talents. Not every gag hits, but enough do and they’re rapid fire enough to keep the laughs coming. It’s weakest when they have to deal with others and explain themselves. These scenes tend to feel paint-by-numbers and uninspired.

The effects are solid, despite a few disappointing shots. They’re somewhat darker overall than the original, but maintain the same tone of goofy playfulness. The movie is more action-oriented than the original. It’s mostly successful in this, although there are a few odd moments (neither McCarthy or Jones are particularly convincing as action heroes).

The story roughly parallells the original, but deviates in most of the particulars. As you’d expect, it’s riddled with references to the original in addition to cameos from every major original player. The cameos are a mixed bag, at best – more sad than nostalgic. The references fare much better; a few are downright inspired.

Yes, this does fall into a large and growing pile of mostly unnecessary reboots, remakes and re-imaginings. It’s far from the worst of them, however, and simply doesn’t deserve the scorn it’s received. While it doesn’t surpass the original, it does stand solidly, if not elegantly, on its own merits. It’s silly, fun and worth a look.