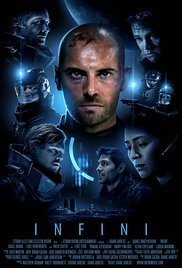 In the future nearly everybody on Earth lives below the poverty level, forcing people to take dangerous work. Mankind has implemented faster-than-light travel via a technology called “slipstreaming”. Matter is broadcast, somehow, to a specific point in the universe, where it’s reconstituted. It can then be called back at any time. This process is rife with danger and is extraordinarily error-prone, often leading to “data corruption”.

There’s a principle in drama called “Chekhov’s Gun” (after Anton, the playwright, not Pavel, the Federation navigator). As he put it: “If you say in the first chapter that there is a rifle hanging on the wall, in the second or third chapter it absolutely must go off.” In short: if you introduce something, use it. All of the back story presented above is given to the audience in a series of dense title cards and almost none of it is ever used in the story.

The story is further confused by a quickly abandoned subplot concerning an imminent attack on Earth and a time-dilation angle that’s interesting, but offers little payoff. These convoluted concepts and their accompanying exposition weigh down the first act terribly. It’s a shame: the story is good, least once we’re allowed to move past the conceits.

Our hero, Whit Carmichael (Daniel MacPherson [IMDB]), is expecting his first child and takes a position on a military strike team to earn some extra cash. When his first mission goes pear-shaped he ends up stranded alone on a distant space station, The Infini. Everybody else has fallen victim to some kind of illness that turns them in raving murderers.

With the help of an elite search and rescue team, Carmichael has to fight the sickness, the station and the planet itself long enough to be extracted back to Earth. The characterizations, performances, staging and execution are all excellent. The horror is visceral, disturbing and, above all, effective. All without being gratuitously graphic.

The story, stripped of the complication, is everything it should be. It’s engaging, both physically and emotionally. It leverages cliche, but doesn’t depend on it. It compares favorably to the best of sci-fi horror and at a fraction of the budget. Yes, this is one third idea jambalaya, but two thirds awesome. Watch it for those two thirds.