I spent much of December in Southern India for business. I was awash in culture and history yet the most amazing thing I experienced the entire time was the traffic. It’s impossible to accurately describe the semi-organized mayhem, the constant multiaxial motion and the utter and complete lack of fucks-given. Here’s a 10 minute video that’s a pale, sad shadow of what I experienced:

The traffic is alive. It reminded me of a herd of animals migrating across a vast plain. Huge, slow buses push ahead dominating, but heedless of, the turmoil that surrounds them. The bulk of the herd is a motley collection of cars, vans and trucks of every possible condition and vintage. They set the overall pace. All the while, nimble, three-wheeled auto-rickshaws and motorbikes weave through the throng finding and exploiting whatever paths become available.

There are rules, yet the actual traffic laws fall second to the unspoken contracts made by the participants. Marked lanes are universally ignored. If you can fit, you slide in. Horns are in near constant use, but almost always as polite notifications; a gentle, “hey, I’m here!” which are, surprisingly, honored much more often than they’re ignored. Passenger capacity is purely a matter of physics, not reason: if you can fit five people into a three person auto-rickshaw, you are absolutely welcome to do so. 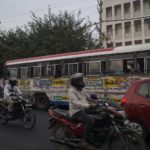 Traffic is non-stop and utterly fascinating. 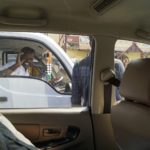 This guy thought my picture-taking was hilarious! 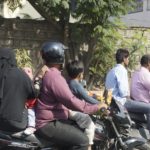 Yup, that’s a family of four (and a single helmet) on a motorcycle.

Speeds are much slower than Americans will be used to, but forward motion is near constant and true gridlock almost non-existent. There’s no concept – at all – of “personal space”. It’s rare that you’ll be more than a hands-breadth away from the vehicles on each side, yet accidents (at least serious ones) seemed rare as well. Another thing that’s missing from American traffic: all the angst. Indians simply don’t take traffic as seriously as we do. They don’t enjoy or look forward to it, but “road rage” just doesn’t seem to be a thing.

During my stay I spent a lot of time in traffic. One thought that continually buzzed through my head was, “shouldn’t self-driving cars be doing this?” Currently we’re creating implementations that follow the rigid, “stay between the lines” models of genteel first world society. While this is necessary, at least at first, to make people comfortable with the technology, it’s not, I believe, where we want to end up.

Instead, imagine the roads full of autonomous vehicles leveraging the Indian model. Here’s an overhead video that demonstrates the effectiveness of the system much better than my ground-level attempt:

It may appear chaotic at first, but the reality is beautifully elegant. Making complete use of the space available, sliding in and out as needed, respecting pedestrians while continuing to advance. Like birds or bees, vehicles shouldn’t just drive place, they should flock and swarm to them. Like corpuscles in a vein, they should fully utilize the space without interfering with one another.

It’s a dramatically different model, one that Westerners may be very uncomfortable with, yet it’s clearly a more efficient one; one with a significantly higher return on investment for our infrastructure.