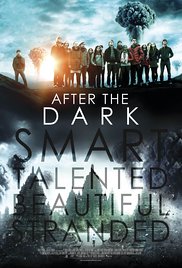 “After the Dark” on IMDB

The purpose of some films is to make the audience think; to provide discussion topics. They lay out rules, set up pressures and obstacles then examine the reactions of their ridiculously verbose characters. Success might be measured by the time the audience spends discussing the problems posed. It might also result in a violent argument with dear friends!

This movie isn’t a success. Your friends are safe.

It’s the last day of classed at an Ivy League international boarding school in Jakarta. Mr. Zimit (the talented, but wasted, James D’Arcy [IMDB]) is a philosophy teacher that decides to pose one last thought experiment to his precocious class. In it, the students are assigned careers and, based upon that, faced with the decision of determining which ten of the twenty of them will enjoy survival in a fully equipped shelter during a nuclear holocaust.

The writing is noticeably lazy. The cast lacks an audience surrogate, so the script relies heavily on that special brand of incredibly clumsy exposition where characters explain, out loud and in detail, topics that everybody in the room already understands intimately. More damaging, the class is instructed to use only logic to solve the problem, yet the only interesting aspects of the discussion result from random or hidden information.

It’s a poor example, but pose this “thought experiment” to your friends: “You’ve been bitten by a snake and will die if you don’t reach a hospital quickly. You have both a donkey and a sports car at your disposal, which do you choose?” Once they logically choose the car, reveal that the car is out of gas and the donkey is a magic racing donkey. Then scold them for being so stupid and not predicting the random variables you’d added after the fact.

The experiment is run several times throughout the course of the movie, becoming more confused and correspondingly less interesting as a result. Each run is realized onscreen with elaborate CGI and impressive cinematography. The recreations are clearly intended to be dramatizations of the classroom discussion, yet it rings false as characters do and say things that would never be raised in a discussion.

The ending is a mash of feel-good fluff and tortured reveals. It references motivations and patterns of action that were, at best, never made clear or, at worst, simply nonexistent. The movie wastes a talented cast and obvious technical acumen on a pompous, self-indulgent, intellectually vacant script.

In short, this movie is deeply up its own ass. If you want to see attractive young people spouting nonsense, give it a shot. If you’re interested in a truly thought provoking movie, try 2015’s “Circle” [My Review]; you’ll be significantly less frustrated.