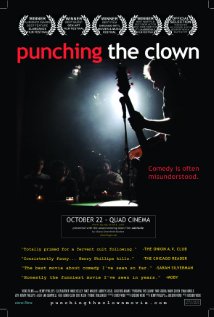 “Punching the Clown” on IMDB

The “mockumentary” style has been a little overdone lately but this is nicely refreshing and has some genuine, laugh-out-loud moments.   It’s far from perfect but it has a depth that allows it to overcome its problems.  In all the best ways this reminds me of genre classics like “Best in Show” or “Comic Book: The Movie”.

The film follows folk-singer-comedian Henry Philips as he rides out career highs and lows and a collection of misunderstandings during an attempt to make it big in L.A.  He ends up living on his brother’s girlfriend’s couch, hiring a manager of questionable skill and singing open-mic nights for the exposure.  Due to a (rather insipid) misunderstanding he gets an “in” with a local record company.

During his initial meeting another misunderstanding and an extended game of telephone brands him a neo-Nazi.  Although a primary driver this entire plot device is questionable at best.  Even if initially entertaining it’s drawn out too long and never really succeeds on any fundamental level.

It’s the small things that make this movie something special.  The incidental conversations, the off-hand observations and the often wonky supporting characters.  The main plot is basically incidental (which is good because honestly it fails more often than it succeeds).  The hilarious, quirky music is, of course, a huge part of the film’s charm.

Henry is a deeply likable character and that helps to smooth many of the rough edges of the film.  There’s a deep sincerity here that begs you, as would any struggling friend, to forgive minor transgressions.  The film is very funny but that’s almost unimportant.  More important is a feeling they’ve captured: like a younger brother who is finally allowed to tag along with his idolized older sibling.  It doesn’t matter that your older brother’s day is, truth be told, rather dull and without purpose.  You just feel thrilled to be along for the ride.