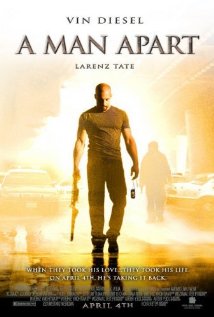 “A Man Apart” on IMDB

This was a pretty standard action movie.  A tough, straight DEA agent goes rogue after a cartel attempts to kill him and murders his wife in the process.

One problem here is that Vin Diesel just didn’t convince me of his pain.  This may have been purely a fault in the script which was a bit overly complicated.  The major sub-plot deals with determining the identity of the true villain in the story and this works against my ability to commit to the vendetta.  It’s hard to work up a good head of steam when you’re consistently unsure who you should hate.

It doesn’t help at all that we’re barely introduced to his wife and so are unable to form any personal bonds with her.  She’s little more than a prop: something to point too when things go sour and say, “See, that’s why I’m doing this!”

Finally Diesel’s never really “Apart”.  His partner, friends and former associates are almost without exception willing to throw in with him.  While this could have been interesting none of these other characters are particularly memorable.  Things ended up being more confusing than anything else.  When, two-thirds into the movie Diesel is still, basically, working within the system you begin to wonder if this is really the movie they set you up for.

One the other hand it is somewhat refreshing to see a simple, “old school” action flick now and again.  There’s no trace of spoof, sci-fi or the supernatural here.  No magical new drugs or super-weapons.  We’re talking simple, old-fashioned cocaine and standard-issue sidearms.  There’s also a truly inspired (if brief) performance by Timothy Olyphant.

This is far from a bad movie for the genre, but it’s also far from great.  The time that should have spent cementing our emotional commitment to the few characters that matter is wasted introducing ultimately irrelevant sub-plots and the movie suffers just a bit greatly in the end.