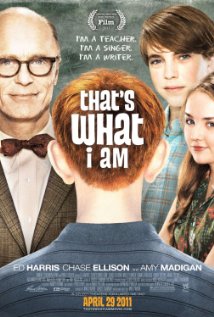 My wife enjoyed this more than I did – by a fairly large margin so take that for what it’s worth.  It’s not that I didn’t like the film it’s simply that I thought it was being a little lazy at times and a little scatter-brained at others.  It really didn’t know what story it wanted to tell (so it tried to tell them all) or how it wanted to tell it.

It’s a “coming of age” story (whatever that’s supposed me when the kids in these movies can be anywhere from 7 to 17) set in the 60’s.  These kids are in their first year of Junior High School.  The film gives us a “normal” kid, Andy, as the main character and a thick, syrupy “Wonder Years” narration by the elder Andy.  He’s paired with the class geek, “Big G”, for a lengthy end-of-year project by the school’s favorite teacher (Ed Harris).

The plot starts branching fairly quickly.  How will Andy handle the requirement to work with a nerd?  Will Andy ever do anything about his crush on the class hottie?  Why do 12-year olds still sincerely believe in cooties?  This last point is (lazily) used to provoke one child into violently beating another – creating a bizarre balance of brutal honesty and frivolous idealism that just doesn’t hold up to any scrutiny.

None of the several main threads is bad in and of themselves: they’re all simply trite and clichéd.  However after all of these elements are introduced the film switches gears: our favorite teacher is accused of being a “homo” and threatened with the loss his career.  In more age-inappropriate ridiculousness almost none of the Jr. High students know what a “homo” is as they blithely spread the rumor.

This is where I really lost faith in the film.  All of these scenes (nearly a third of movie) are handled completely by the adults.  Scene after scene of adults talking about this adult issue and making adult decisions.  The kids are almost entirely forgotten.  The narration disappears.  It’s basically a different movie entirely.  The film takes the easy way out.  It would have been more work but vastly more interesting to see this unfolding in the background from the kid’s perspective.

When we do get back to the kids we’ve lost all of the emotional inertia that we had collected previously.  The class project is almost entirely forgotten in favor of a talent show that Big G insists on performing in and Andy’s quest for his first kiss (despite the class bully’s disapproval of his choice of partner).  Big G’s best friend (placed in the film exclusively to feed the audience emotional cues since almost no character development is done with Big G) tells us to feel worried, so we do.  Andy struggles with fear but in the end does the right thing, faces his demons and gets the girl.

The film tries desperately to be as serious and honest as “Stand By Me” but spends most if its time undermining that by trying to be as innocent and idealized as “A Christmas Story”.  A simpler story, maintaining a cleaner presentation would have been much more powerful.  Pick any of Andy’s plots and tell it well against the background story of a wonderful teacher being persecuted based on childish rumor.

I realize that I’m being harder on the film than it probably deserves.  There’s a great performance by Ed Harris and some promising work by a few of the kids.  I also fell a tiny-bit in love with Andy’s mom.  It really is a better use of your time than most movies these days.  I’m being so hard on it because it was so damn close to being something truly special.