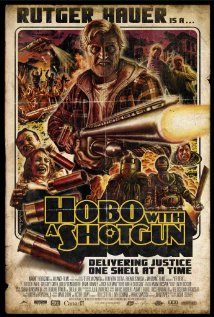 “Hobo with a Shotgun” on IMDB

As much as I’m normally a fan of the grindhouse genre and recent homages I found myself having trouble with “Hobo with a Shotgun”.  It’s easy to take the simple path out: the film is meant, by loving design, to appear like the best (worst?) low-budget, over-the-top gore-fests of the early 80’s.  Most people will watch a few minutes and walk away blaming the production values or the gore or both.

As a fan of the genre none of that flies for me.  I adore crappy effects, bad acting and lousy scripts.  In this case they just failed to completely gel into something worth seeing for me.  It may sound silly but I think that one issue was the Canadian accents.  I’m sure it’s a personal response (having grown up just over the border) but I guess I just find it hard to take ultra-violence seriously coming from a Canadian.

There actually is a lot to like here (at least for fans of the genre).  The film has some uneven pacing, but doesn’t take itself as seriously as “Machete”, for example.  Then it would dip down sometimes and take itself much too seriously.

The special effects are laughably, meaningfully dated.  Heads, feet, hands – whatever – all explode shapelessly like a popped bag when shot, hit, run over or stared at.  They release sprays and splashes of blood in ludicrous ways.  When most effective the shots reminded me of the classic Troma films of the early 80’s.

Rutger Hauer is a good actor (it really is a shame his career has flagged so badly) and an excellent casting choice here.  Brian Downey is surprisingly effective as the crazed, blood-thirsty kingpin.  Pretty much all the other roles are populated by truly terrible actors which, for this kind of movie, isn’t really saying a bad thing.

The film forcibly pushes the boundaries of taste – anybody accidentally watching this is in for a rude education – but the execution is so poor it’s hard to take much of it seriously.  Of course with this kind of film that may be on purpose.  You already know if you’re going to like this movie.  If you don’t there are better examples of grindhouse movies to be your introduction.