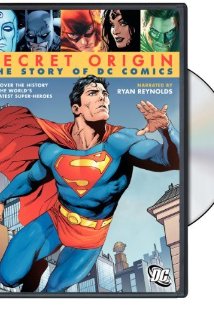 “Secret Origins: The Story of DC Comics” at IMDB

That said this was an excellent introduction to the history of one of the most influential companies in history.  Superman, Batman, Wonder Woman, Aquaman, The Flash, Green Lantern – these characters are known universally.  They have touched billions of people with their stories over the past 75 years.

Narrated well (enough) by Ryan Reynolds the actual documentary is pretty standard talking-head fare.  These are some heads tho’.  Len Wein, Neil Gaiman, Walter Simonson, Karen Berger and many others add color to the archived footage of Jerry Siegel, Joe Shuster, Bob Kane, Alan Moore, the legendary Julius Schwartz and many others.

Structured around the traditional eras in the comics industry (Golden, Silver, Bronze and Modern ages) we follow DC’s growth from a small publishing firm trying to distance itself from salacious girly books and broaden their audience to a publishing tradition creating new genres across all forms of media.  Although it’s a brief look (90 minutes is barely enough to scratch the surface) the major issues are all touched upon.

The ridiculousness of the comics code and the dark times that followed.  The lens that comics held to racism, sexism and other social issues.  The british invasion leading to the creation of the Vertigo line.  The movement to television and film.  It’s all touched upon.

Deeper focus is given to certain watershed moments.  The creation of Superman, Batman and Wonder Woman are, of course, all covered in detail.  Ground breaking stories like “Kingdom Come”, “The Dark Knight Returns” and “The Death of Superman” are placed in historical context and the creation of the Vertigo and Wildstorm are detailed.

As the story entered into the modern age and began to cover the comics that I personally grew-up with I was surprised at the emotions that arose.  Hearing Frank Miller talk about “The Dark Night” gave me chills and I’m not ashamed to say that I teared up remembering “The Death of Superman”.

For those that love comics this is a glorious stroll through most esteemed company to ever produce them.  For those that still hold comics are “just for kids” this a great introduction to the impact they’ve had the breadth and depth they now enjoy.