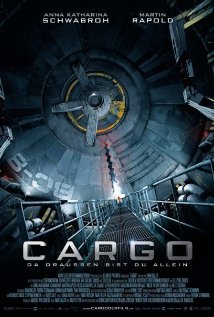 Cargo is a rich, stylish sci-fi thriller in the vein of “Sunshine”, “Moon” or “Solaris”.  The first half of the movie is as good as the genre gets.  All the elements are there: a close-knit crew dealing with strangers, a huge ship with a mysterious secret and a dangerous, unexpected development.

The acting from the small cast is subdued, but generally good.  Some of the emotional changes are less than believable, but that’s more a problem with the script than with the acting.  There are exceptions however and at least a couple of characters come off as nothing more than robots; just pushing plot points where they need to go.

The visuals are what really sell the movie.  There’s an excellent quality of reality to the fictional space-stations and ships.  The design seems wonderfully practical rather than fantastical.  There are some truly impressive set-pieces as well, especially surrounding the enormous cargo hold and cryogenic chambers.  They remind me, in all the best ways, of the recent “Doctor Who” visual design.

Unfortunately the last half of the movie wastes all it’s momentum.  Scenes drag on and the climax simply makes no practical sense at all.  Once you hear the master plan if you don’t groan at least a little bit you’re probably not paying attention.  With the plan of action so anemic the ending, as beautiful as it may be, just isn’t satisfying.

Still, with all it’s faults it’s hard not to recommend “Cargo”.  Even half a great sci-fi movie is something worth spending time nowadays.  (Of course if you haven’t seen “Sunshine”, “Moon” or “Solaris” see them first.)