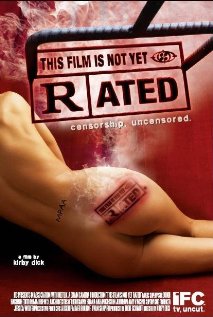 “This Film is Not Yet Rated” on IMDB

This was a good, but unfortunately flawed, look into a topic that simply should get more attention.  An NC-17 rating is essentially a death-sentence for a film in the United States.  Most theaters won’t present it, most video stores won’t stock it.  Walmart and Target, accounting for a huge percentage of video sales, won’t carry it.

In a very real way the MPAA controls the fate of film-makers in this country, but they follow nobody’s rules but their own, publish no standards and answer to no outside appeals process.  The charge most examined by the film is the secrecy of the ratings board and the appeals board.

The film starts – as you might guess – with a look at the origins and history of the MPAA and it’s practices.  This is interesting, but I thought it consumed just a bit too much of the running time.  Several animated text sequences presented some of the information throughout the film, but although good they highlight the lack of a strong narration within the body of film itself.

Time was well-spent on creator interviews with such notables as John Waters, Matt Stone, Kimberly Pierce, Kevin Smith and many others that have felt the bite of the rating board.  Examination of many of the scenes (often split-second scenes) that earned the dreaded NC-17 was also interesting as was a damning comparison of heterosexual rated “R” scenes and homosexual counterparts that earned their films NC-17.

The core of the film was the attempt, by a hired private investigator, to obtain the identities of the ratings board and appeals board members.  This is interesting, but is truly the least relevant aspect of the issue and is given the most time.  It seems self-indulgent as we see scenes of the film-makers and their P.I. going through trash, tracking down license plates and following potential raters into restaurants.   The film basically lays its egg here as it ends with the reveal of these people but contains no attempts at interviews or further information.  Essentially you feel that (finally!) things are getting interesting then… nothing.

A better potential guiding thread, the ratings process and ultimate appeal of this movie itself isn’t introduced until the last third and also falls somewhat flat.  I think that if the narrative started with this and carried us through to the end it may have held together much better.  This is far from a bad film, but with a topic so important it’s a shame it wasn’t a better film.