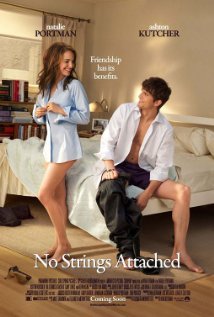 “No Strings Attached” on IMDB

I’m not a big fan of Ashton Kutcher but I’m a huge fan of Natalie Portman so it kind of balances out.  Unfortunately they spend a lot of time in this movie trying to make her unlikable but luckily that’s impossible.

The movie itself is exactly what you’d expect from a modern romantic comedy… perhaps slightly better than average (something exclusively due to Portman).  Everybody is pretty, there’s no surprises and you already know how it ends.

So overall I guess I have to say I liked it more than I disliked it.  It’s not art, but how much really is?