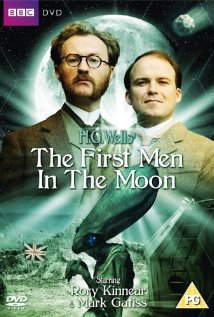 “The First Men in the Moon” on IMDB

[This is the second review for this edition of  my semi-regular “my-wife-and-kids-are-visiting-relatives-so-I’m-watching-loads-of-crappy-movies” film festival.]

This was completely charming and throughly enjoyable from start to finish.  I’m a big fan of H.G. Wells and Victorian sci-fi in general and this is a great example of why it can be so engaging.  There’s a simplicity to it, an innocence that just makes me smile.

While not a direct adaptation of the book the changes made were clearly made with love and respect for the source material (something sorely lacking in nearly all productions these days).  The story is framed through the eyes of a small boy in England excited to see the televised first moon landing later than evening.  He meets an ancient man who recounts a fantastic tale of his trip to the moon some 60 years earlier.

He had met an eccentric inventor who created an anti-gravity material with which they made the trip in a bathysphere like device.  There they met an insect-like race of moon people and had a great adventure.  Much of the story focuses on the building of the vessel and the opposing personalities of the two men involved.  It’s nice, calm slow-burn that feels neither out-of-place or dull.

I adored the mixture of the fictional and real science and how they construct events to mesh with our modern perspective.  The special effects are subdued but excellent (and not just excellent for the budget) easily matching those seen in other BBC sci-fi shows and movies.  They are budget effects, make no mistake, but there’s a good sense of how far that budget should be pushed that’s lacking in many other low-budget work.

It’s a shame that when given a small budget and asked to produce a “made for TV” sci-fi movie the BBC produces something genuine like this and the SyFy channel settles for tripe like “Anacondas: Trail of Blood” or “Dinoshark”.