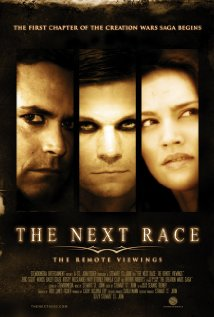 “The Next Race” on IMDB

[This is the first review for this edition of  my semi-regular “my-wife-and-kids-are-visiting-relatives-so-I’m-watching-loads-of-crappy-movies” film festival.]

This movie is only 38 minutes long… it felt like hours.  IMDB lists it as “The Chronicles of Hollow Earth: The Next Race” but the poster calls it “The Next Race: The Remote Viewings” – neither title really makes any sense even after you watch the movie.  This kind of sets the stage for how you should treat this movie.

I’m going to spoil this movie.  I don’t care and you shouldn’t either.

Humans create a race of humans that are exactly like use except they have different DNA and all wear eyeliner.  They’re supposed to be super-soldiers for a war that never happens.  Since the war never happens apparently we treat them like shit and they rebel.  That war that lasts 300 years.  They win and call themselves “ghen” and all move into giant cities underground for some reason… or maybe Earth was hollow to begin with… or something.

Anyway it’s now several hundred years later.  The Ghen live below ground and control the damn, dirty humans who live in poverty and sickness above ground except for a few that are used for slaves.  There’s a bad guy that wants to kill all humans and he has brother than wants to kill all humans too.  They get along well and work with “ministers” that go to surface to kill humans.  Except all the humans are suffering from a plague that the narrator told us about but that we never see.

Then he escapes to the surface by being a real dick and leaving the girl to be smacked around by his brother.  But it’s okay because he’s going to save the humans by not starting a war.  As he goes off to do that the movie ends.

Apparently this movie was made on a shoestring budget in an effort to raise 20 million dollars to make two sequels that would finish this grand mess in style.  There’s really nothing to do but admire the sheer chutzpah.  Oh, and avoid this movie.  Do that as well.

[After I finished this I noticed the tagline on the poster: “The First Chapter of the Creation Wars Saga Begins”.  It’s the first chapter!  Of a SAGA no less!  A saga dealing with no less serious a topic than wars over creation itself!  Chutzpah, folks!  Chutzpah!]