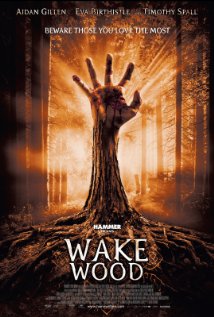 [This is the third review for this edition of  my semi-regular “my-wife-and-kids-are-visiting-relatives-so-I’m-watching-loads-of-crappy-movies” film festival.]

The whole “parents lose a child and will do anything to get them back” and “evil kids” genres are a little tired and it would be easy to dismiss this as a “Pet Semetary” clone and be done with it.  However that would be wrong as this has a lot offer.

The setting definitely helps.  Small Irish villages are perfect for this kind of isolationist tale with their mixture of the ancient and modern.  I loved the rituals on display here.  They were intricate and creepy and raw but with some odd inclusions of modern technology that I found really engaging.

There’s an odd honesty to horror films being made outside the U.S.  Some of the best I’ve seen in recent years have been Australian or British or, in this case, Irish.  Low budget movies from the U.S. often seem to be of a piece: either slasher or vampire gore-fests with casts of vapid future corpses and little to say.

The film has flaws but happily relied much more on the generally excellent acting and uneasiness for its scares than gore (although there was a fair share of that as well).  One complaint is that some of the motivations were given too little foundation.  The husband, especially, seemed particularly easy to convince when needed.  This helped move the plot along but felt a little cheap.

This is also a celebration of sorts because I feel it’s the first real return to form for Hammer Productions.  Low-budget horror can be good and this is a creepy, disturbingly excellent example.