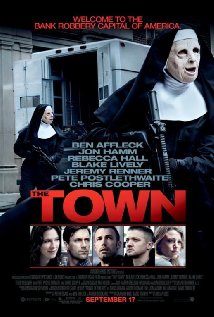 “The Town” on IMDB

Ben Affleck takes a lot of crap (it might be because he’s done a lot of shitty movies, but that’s just a guess) but he actually pulls this one off pretty well.  It may just nostalgia for Boston (we lived there for 15 years) but we,both my wife and I, enjoyed this.

There’s no twists or turns – the basic plot is pretty clear after the first 10 minutes or so – but the story, predictable as it may be, proceeds smoothly.  It is a little slow at times, especially in the beginning, but not so slow that you’ll lose interest.

The fundamental premise of the film (that there are over 300 bank robberies in Boston per year) is ludicrous and you really start to feel it as the crew depicted basically just pulls off job after job.  Swallow that pill, however, and you easily start to warm up to the story.

The acting and script are solid with a few exceptions.  I wasn’t completely sold on Rebecca Hall’s performance as the female lead.  The character felt flat to me.  The audience is told her merits rather than given the chance to witness them or grow truly fond of her.

Affleck gives a solid performance but of course in many ways he is playing himself so it’s hardly a stretch.  Jon Hamm is uniformly excellent in everything he does and doesn’t disappoint here even if his character essentially disappears from the middle of the film.

There are many (MANY) Boston references here and while good use is made of this great city it feels forced at times.  We see scenes on the Charlestown Bridge, Harvard Square, the North End, Fenway Park and several other well-known locations.  The main characters feel like tourists at times.

The film may be paint-by-numbers but it stayed in the lines and used the all the right colors.  If you like the genre or just a fan of Affleck or Boston you’ll probably like this.