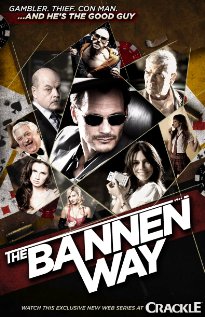 “The Bannon Way” on IMDB

My brother suggested I watch this and when a movie has a better-than-average chance of being good I like to wait and watch with my lovely bride (who has less patience for schlock that I do).  So tonight we sat down and enjoyed this.

There’s no two-ways about it: this is a pretty good movie.  The acting (by a cast chock-a-block with prime-time TV character actors and former B-now-C-listers like Robert Forrester and Michael Ironsides) was generally better than expected.

The script was fun and (even if it did drag a little in the end) simple and smooth.  The generally likable characters were archetypical caricatures and that’s a good thing in a movie like this: bad guys are bad guys, good guys are good guys and we don’t need more than that.  People act the way we expect them too.

As much as it really tries to be a classic caper film it doesn’t commit to it enough.  Instead it opts to spend a lot of focus on Bannon family dynamics that were interesting but just didn’t gel as well in my opinion.  I also felt that the romantic sub-plot was more than a little forced but that’s probably picking nits.

I was surprised to learn that this was actually the edited together season from the Crackle.com web series of the same name.  This explained some of the odd pacing I noticed while watching.  The scenes kind of “pulsed” with mini-climaxes and hard transitions – perfectly understandable when the original format was 5 minute webisodes.

While quite not up to same level if you enjoy caper movies like “Oceans 11” or “Snatch” I think you’ll like this quite a bit.  As a feature film it’s good but lacking, as a television pilot it’s impressive and leaves you wanting more and if considered only as a web show it’s downright phenomenal.