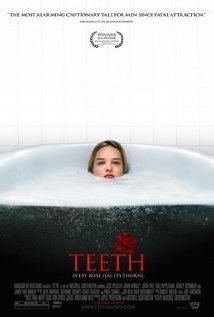 This is an excellent movie but not for the squeamish or faint of heart.  There’s very little actual gore here, but what there is disturbingly, ball-crunchingly effective.  This is a movie that – especially for men – may strike too close to home.

The reason for this becomes clear once the (pun noted) point of the movie is made clear.  Dawn (the adorably likable Jess Weixler) is not like other girls.  She has (very sharp) teeth… down there.  “Vagina dentata” in the Latin.

These extremes are explored in a backdrop of pure misogyny.  Men in this film are, almost without exception, dirty, evil fucks that deserve every horrible bit of what they get.  Because of this it’s very easy – and likely justified – to consider the entire thing as nothing but a female castration power-fantasy.  It does work well on that level but it also works as a direct reflection of that; as an examination of men’s worst fears and as a loss of power.

What allows the movie to work without devolving into preachy, sentimentalized gender politics is the often subtle humor.  There’s also a restraint when it comes to the more disturbing moments that’s admirable.  It doesn’t shy away from explicitness at all but neither does it dwell on it unduly.

There were minor aspects of the movie that I didn’t like.  It leaned a bit too heavily on imagery that intimates Dawn’s abnormalities are due to environmental pollution from a nuclear plant.  There are several shots of nuclear cooling towers spewing black smoke (something that they don’t actually do) that irked me.  There were also some sequences that stretched suspension of disbelief just a little too much.