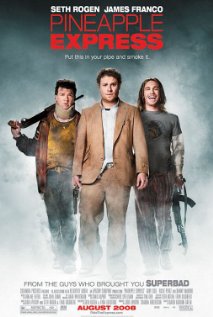 This one kind of slipped through the cracks for me.  It stands out as something that I should have watched a long time ago but somehow never got around to.

I count myself as a Seth Rogan fan.  That said much of what he does I absolutely hate.  He has a certain voice, a “vibe” that works insanely well in some things (“Superbad”) and terribly in others (“The Green Hornet”).  This is an example of the former.

Pineapple Express is a stoner action movie – maybe the only stoner action movie.  It’s funny – funny as hell in places – but it really is an action movie first and a comedy second.  Seth Rogan and James Franco have some great chemistry and ricochet ridiculousness off one-another brilliantly.  Danny McBride, whom I really hate, is decent enough as a third wheel as well.

The story is a little silly (and leaves a lot of open holes) but doesn’t get in the way.  Many of the jokes are of the wincing, “baseball-to-the-nuts” variety but they work because they’re not overused and not dwelled on.  The fact that there’s a lot of smart humor in the staccato dialog also helps to raise the movie past what could have easily been a dull, childish romp.  There’s also a classic, hilarious bait-and-switch gag at the end that’s not to be missed.

Bottom-line is we laughed a lot and had a ton of fun with this.  There’s really not much more to say.