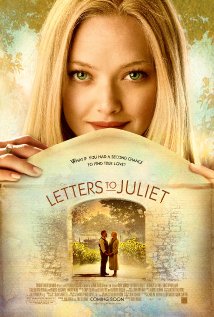 “Letters to Juliet” on IMDB

I find it difficult to review this.  There are elements of an absolute classic here, make no mistake.  At the same time there are hallmarks of a watch-once-and-throw-away disposable date flick.

There are definitely tropes at work here.  We have the shy, unfulfilled American abroad.  The sentimental matron.  The long-forgotten love.  The jerk with the heart of gold.  The oil-and-water personalities that might lead to something more.  Due to the strength of the performances and the script none of it completely descends to cliché but neither does it transcend.

The film is hurt by its leads.  Amanda Seyfried was charming enough but somehow always looks like she’s missed a point someplace.  Christopher Egan was decent enough but too stiff and flat to truly enjoy.  Worst of all I simply didn’t see any chemistry between them.  At all.  The relationship happened because it was in the script, period.

Vanessa Redgrave is the saving grace.  Her performance is impeccable and completely sincere and you truly feel for her as the search progresses.  This is the real story of the film but unfortunately it often gets brushed aside for the much less interesting story of Sophie and Charlie.

In almost all ways there are two movies intertwined here.  A touching, mature, heartfelt drama exploring the enduring power of love laced together with a hackneyed, lifeless, Summer rom-com.  You’ll even see it in the music.  There are wonderfully quirky, soulful selections (including a great italian version of “I’m a Believer”) followed by trite, auto-tuned, teeny-bopper ballads by Taylor Swift.  You can almost see the clawed, scaled hand of marketing reaching into the film to ruin it.

The movie has two climaxes as well, one for each couple.  One of them was deeply sincere and moving; one was pain-by-numbers and soulless.  I’ll let you guess which was which.  Still – watch the movie.  You get a great, classic love story no matter how you slice it… you just have to sit through a trite, average love-story to see all of it.