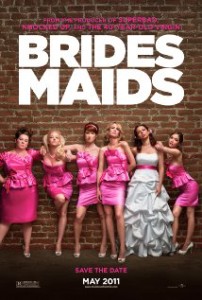 Had a lot of fun with this.  The characters were all likable and while admittedly exaggerated and a little single-dimensional all had an engaging, genuine core.

Kristen Wiig has always been consistently underrated and she truly shines here.  The supporting cast is a wonderfully eclectic mix of oddballs featuring one of my favorite British imports, Chris O’Dowd.  Other highlights include the completely charming Ellie Kemper and John Hamm in a hilarious turn as a total tool.

Women comedy writers sometimes use raunch as a defense mechanism as if to say “we can be just as bad as the boys!” or “Look, we can say ‘fuck’ and talk about sex just as much as they can!”  This tends to feel forced and insincere.  Wiig (and her writing partner Annie Mumolo) circumvent that pitfall in the simplest way possible: they created good characters and wrote them good dialog.

The women in this movie swear like sailors, they talk openly and graphic about sex and there’s an extended (and hilarious) explosive diarrhea scene.  All of it works.  None of it feels superficial or out-of-character or tacked on for shock value.  That’s not to say that certain tropes weren’t plumed deeply.  The gratuitous “weird fat guy” may be a weird fat gal but the cliché is present in force.  But even here the character is uniquely female and consistent.

While it wouldn’t be incorrect to dismiss this as a girl version of “The Hangover” you’d be doing yourself a disservice.  This isn’t a “women’s movie” trying to match “men’s movies”.  It’s not a vapid “Romantic Comedy”.  This is a funny, smart, mature comedy that just happens to be told from a female point-of-view.