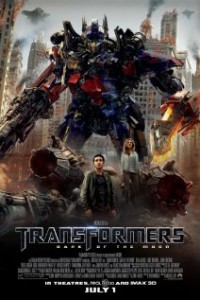 “Transformers: Dark of the Moon” on IMDB

Did you see the first two movies?  If so, you know that you are in for at least two things.  Firstly, you’ll get some mind-blowing special effects.  Jaw-droppingly intricate effects.  Effects that will make you want to cheer.  Secondly, you’ll get an almost completely incomprehensible story.  A bloated, hackneyed tumor of a story.

The story will be the sticking point for most people, I think.  It’s not just that it’s stupid, but it’s also long.  Very, very (very) long.  This is a summer action flick folks: does it need to be two-and-a-half hours?  The answer is clearly “no”.  We see way too much of Shia LaBeouf for one thing – his screen time could have been cut in half easily.  We also get a few self-indulgent montages most of which could have easily been edited out.

There are also some really, stupendously moronic claims made about Apollo 11.  As much as it physically hurt to allow them into my brain we are talking about a movie populated with giant robots so perhaps historical accuracy may not be worth nitpicking over.  On the plus side it did allow for a great cameo by Buzz Aldrin (one of my personal heroes).

One of my problems with the movie, really with the whole franchise, is the reliance on outside elements to tell the story.  Megatron is a great villain but across three movies he’s basically ignored (being almost completely absent from the first, sidelined in the second and basically a minor plot-point here).  Every movie, it seems, must invent something more ridiculous than the last over which to battle.  This time there’s a super-technology that can, if deployed, transport the planet Cybertron “into Earth’s atmosphere”.  The idiocy of the idea is bad enough but then we also get effects shots of it happening.  The movie seems to be attacking our brains; probing for weaknesses and looking for the cracks in our sanity while distracting us with shiney objects and explosions.

With all of the “extra” stuff happening and all the time spent on new characters introduced by the films, the beloved original characters are given mere minutes of screen time.  We never really get to know any of them.  Almost as soon as your mind can say “Cool, there’s Rawhide!” he’s gone.  Optimus Prime is given the most attention, of course, but sadly is hampered by awful characterization.  Optimus Prime is a good guy.  He shouldn’t be saying things like “we’ll kill them all!”