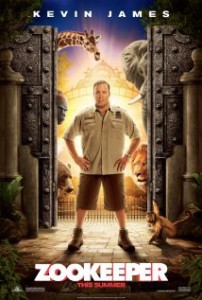 Stop me if you’ve heard this before: a self-conscious, akward guy goes after an incredibly hot girl far outside his class (who, coincidentally, is also kind of a jerk).  To accomplish this he recruits his hollywood-plain (read: incredibly hot with glasses) friend to help.  Although he eventually gets the girl, something happens that makes him realize that his plain friend was what he really wanted all along.  After a frenetic sequence where he has to chase after her to tell her that he loves her they kiss and a classic 80’s song plays loudly.

This is that movie with talking animals.

The problem is that the talking animals aren’t very funny or personable.  These movies live or die by how well the (mostly b-list) celebrities deliver hilarious punch-up lines through computer animated animal mouths.  Sure we get self-referential gags laced with pop-culture references but they’re just not that good.  There’s also some physical comedy that for the most part (pun noted) falls really flat.  The final nail in the coffin is the almost total lack of chemistry between the leads.

Just skip this.  If you want to see talking animals rent “Charlotte’s Web” instead; maybe “Babe“.  They’re both great.