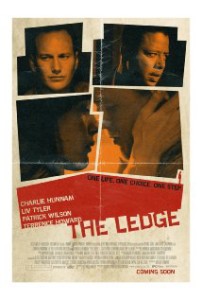 “The Ledge” on IMDB

I’m torn about this one.  On one hand there’s a rare and interesting portrayal of an atheist (always like to see that).  On the other hand there’s a really stereotypical portrayal of an evangelical christian (which, to be honest, is also something I always like to see).  But the interaction between them and the ultimate crisis presented just doesn’t ring true.  The fact that pretty much everybody is a tool doesn’t really help.

The basic story involves a likable atheist (Charlie Hunnam) with a tragic past, an unbalanced evangelical christian (Patrick Wilson)  with a tragic past and his beautiful young wife (Liv Tyler)… who also has a tragic past.  The wife is with the husband for all the wrong reasons and when subjected to the advances of our handsome unbeliever is unable to resist.  Terrence Howard’s police detective (who, incidentally, has a tragic present) is a definite highlight as well.

The titular Ledge is a reference to the main question of the film: will an atheist who has no belief in an afterlife sacrifice himself for another?  As an atheist let me say outright: this is a really stupid question.  Faith simply doesn’t enter into this.  The only ones that are truly unsure about this question are those with a massively skewed misunderstanding of what atheism really is.  As an aside, none of those people would ever actually watch this film.

I understand that the filmmakers are trying to start a dialog amongst viewers but the issues posed are so caricatured as to be more laughable than thought-provoking.  The presentation is also rather ham-fisted with both our protagonists quoting scripture easily and at length in a completely unnatural way.  It’s a shame that the more profound, layered – but significantly more practical – questions about the incompatibilities between the faithful and the faithless couldn’t be examined.

In the final analysis however I would still have to recommend “The Ledge”.  Despite the often forced dialog there are some very good performances and, if seen with the right people, the film can easily be followed by some very good conversation.  It’s so rare that these issues are presented with any real depth that even a problematic portrayal is still well worth the time.