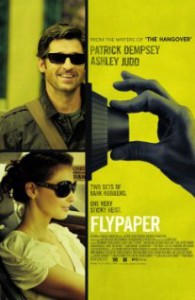 This is one of those independent movies where every scene just screams that everybody had a hell of a lot of fun.  You’ll recognize almost every actor from prime-time television (the good high-budget, well-written stuff, not the schlock).  It really just seems, in the best of ways, like a bunch of talented friends got together on a long weekend and made a movie.

The script and pacing has a very European feel to it: quick cuts, fast dialog and multiple intertwining stories narratives  Fans of “Snatch” or “Lucky Number Slevin” will feel right at home and besides: who doesn’t love a good heist movie?  There’s a little silliness and some ridiculous assumptions that need to be made to push the story along but nothing that stings overly.

Patrick Dempsey is likably neurotic in the lead although his chemistry with Ashley Judd wasn’t as strong as it could have been.  Thankfully the romantic subplot is essentially an afterthought and never gets in the way.  Tim Blake Nelson and Pruitt Taylor Vince are complete scene-stealers as the bumbling thieves Peanut Butter and Jelly.  In fact everybody does a fine job here: there really isn’t a single performance that I’d single out as poor.

This is a fun, light-hearted story to spend an evening with and yet another example that you don’t always need hundreds of millions of dollars to be entertaining.