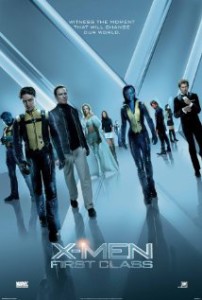 We’re definitely approaching the limits of mass appeal for X-Men.  The fact that this is basically “Jim Henson’s X-Men Babies” make it more likely to be accessible to fans of the previous films, but pretty much everybody else will be lost.

Also the new characters introduced are almost guaranteed to be unknown by anybody that hasn’t read the comics.  Do you think that’s why they hedged their bets and had January Jones spend nearly all her screen time in her underwear?  (To drive this point home they also have an extended scene with Rose Byrne in her underwear.)

But that doesn’t really matter.  If you like comic book movies – especially the previous X-Men movies – you’ll like this.  There’s some great effects, a lot of attractive people and some great ‘splosions.  The story is sharp and smart and, with the tacit abandonment of the casual viewer, complex and rich with subtext.

This is a good movie.  You’ll probably like it.  With that out-of-the-way it lets us move onto the most important thing about this movie, its star:  Michael Ironside.

As anybody that loves film knows Michael Ironside is one of those rare professionals, like Bob Newhart or Lucille Ball, that make every single thing that they’re involved in better.  The producers of “X-Men: First Class” know his power and limit our exposure.  The ignorant may question that the star of the movie doesn’t appear until the last scenes and only gets a few minutes of screen time.  They may also point to the lack of his representation in promotional materials.

Those people are idiots.  Michael Ironside doesn’t play by their rules.