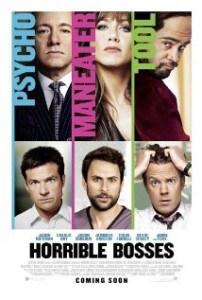 There’s some funny shit here; quite a bit of it in fact.  Ultimately the movie ended up falling flat for me however.  Nothing specific really stands out; it’s just the same slow descent into unfunny plot-housekeeping that plagues the vast majority of modern comedies.

The highlights are almost exclusively due to the “bosses” in question – all of them are excellent even if they are sometimes forced out of character to push things forward.  Colin Farrell is the obvious standout but he’s also given the most work with comedically.  Kevin Spacey is as focused as ever and plays a wonderful bastard.  Jennifer Aniston has some great moments but the character just isn’t as believable.  She puts her all into it but she just may have successfully type-cast herself out of playing a believable slut.

Alternatively the leads are pretty much “meh”.  There are few actors that play themselves as well as these guys.  If you’ve seen anything they’ve done you’ve seen them here as well.  Jason Bateman is solid and reliable.  Charlie Day is an unpredictable goofball.  Jason Sudeikis is shallow and egotistical.  You’ll scratch your head over how they ever actually became friends in the first place.

The bosses are damn funny but in the final analysis much of the meat of the movie just don’t hold up and it.  It ends up being a cookie-cutter comedy with a few really points and a whole lot of mediocrity.