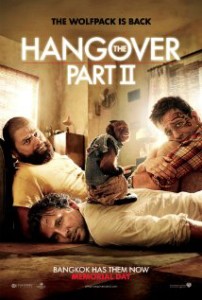 “The Hangover 2” on IMDB

The main problem is that this is really the same movie.  Every single essential aspect from the first is present.  Three friends plan for a great time – but Zach Galifianakis is forced in at the last-minute.  Later they wake up and find one of their number missing but can’t remember what happened (and for the exact same reason).  They work backwards from cryptic clues to reconstruct their evening and along the way get involved with criminals, crazies and crackpots.  It ends with a last-second realization of where the missing friend is (and a reason for him still being there) and a mad, reckless dash to a wedding.  Hell, we even get the same gag in the credits.

The machinations needed to get everybody in place are impressive but forced.  Heather Graham’s character from the first is tossed unceremoniously (and annoyingly) aside.   Justin Bartha, via some very weak storytelling, is kept on the sidelines again.   Ken Jeong gets a bigger role but the reason for him to be there in the first place is frankly stupid as hell – but not nearly as stupid as the reason for Mike Tyson’s cameo.

Finally I was really disappointed that more wasn’t made of the setting.  Bangkok would seem like a bottomless well of possibility but it often seems like they just took the easy road.  There’s very little here that couldn’t have been done more believably in Atlantic City, Los Angeles or New York.

There were so many opportunities to take the original story further; to see where the relationships from the first movie would have gone.  Instead they just hit “rewind” and swapped in new scenery. The first movie was fresh, quirky and often surprising but the sequel feels warmed over; like yesterday’s pizza.  It’s still good but noticeably stale.