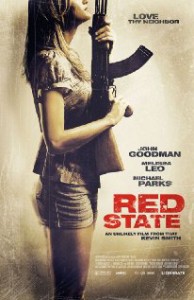 This is Kevin Smith’s first attempt at a straight-up, no-nonsense drama.  As a drama it succeeds in spades; there’s no joy of any kind in this story.  The film will leave you feeling unclean and unsettled – which seems to be the intent – but unfortunately doesn’t have much staying power.

The problem lies in the balance.  On its surface “Red State” is a polemic against religious extremism.  The group presented is clearly based on the despicable Westboro Baptist Church with the addition of militant gun-nuttery.  The group is violent,  heinous and completely without merit.  Unfortunately so is everyone else.

The sex-crazed high-school students that we initially follow, the sherrif-with-a-secret that warps the situation and the blood-thirsty government agencies that get involved.  None of them are worthy of our empathy or respect.  The terrible but effective events portrayed in the beginning of the film just don’t retain their impact because you’re faced with near constant escalation of depravity from all involved.

The ATF presented here is almost comically ruthless and lacks any redeeming qualities.  John Goodman’s character seems to try, for a while at least, to be the film’s conscience but the final scenes erase most of that effort.  Kerry Bishe, in an excellent performance, is truly the closest thing the movie has to a “hero”.  Unfortunately she’s given nothing worthwhile to support her goals and is ultimately ineffective as a character.

There are good performances here including the mentioned stand-out efforts from Goodman and Bishe.  Stealing the show however is Tarantino favorite Michael Parks as the psychotic  preacher.  Many of the individual scenes are also incredibly well done – masterful, even.  Smith clearly has the ability to convey drama as well as comedy and there are many moments of brilliance.

I can recommend “Red State” on the basis of the first act alone.  Parks performance is almost worth the price of admission.  I think it’s a shame, however, that Smith ends up diluting a potentially powerful message by casting his net too widely.