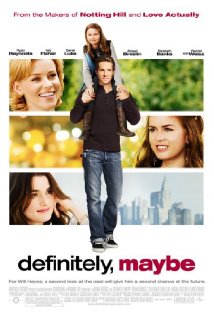 The poster proudly proclaims that this is from the makers of “Notting Hill” and “Love, Actually”.  Aside from the fact that is set in New York rather than London the pedigree is strong.  If you liked those films (and why wouldn’t you? they were both great) then you’ll probably like this one.

Admittedly its not quite as strong as it’s predecessors but it’s still head-and-shoulders above the current crop of trite rom-coms.  Everybody in it is almost nauseatingly likable.  Ryan Reynolds, Elizabeth Banks, Rachel Weisz, Isla Fisher and the young Abigail Breslin – there’s not a bad thing to be said about any of them.

The – very effective – emotional hook here is that of a father trying to explain his impending divorce to his young daughter.  To do this he recounts the story of how he came to New York and met the three great loves of his life.  Seen through his daughter’s eyes we see how messy life can sometimes get.

For people my age there’s a nice, light vein of nostalgia as well.  Much of the movie is set against Bill Clinton’s run for the presidency and his various scandals.  We also see people enthralled with a great new band from Seattle called “Nirvana” and the rise of cell phones.  It doesn’t make or break the movie but adds a nice layer for those of us in the right age bracket.

In some ways, depending on how picky you’d like to be, the movie fails.  A surface complaint may be the hubris of attempting to get an audience to feel sorry for a highly successful, incredibly handsome man’s inability to settle on which of three incredibly attractive, intelligent women he should stick with.  You may also reasonably chafe at some of the decisions concerning some of the break-ups – most people, it seems to me, would try to work through some of these things.

This is hollywood after all – don’t let it get to you.  My suggestion is to forgive its relatively minor flaws.  Just pick a nice quiet night, get into some pajamas and curl up with the sweetie of your choice and enjoy it.