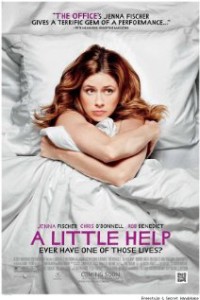 “A Little Help” on IMDB

I feel, in the interest of full disclosure, that I must admit a bias here.  I adore Jenna Fischer.  Really, what’s not to like?  She’s smart, talented, hot and infectiously joyful (although this is a drama and she’s not really ever happy in it).

This movie makes the same mistake as several others in having us believe that she’s plain and has “lost her looks”.  (At one point her husband actually says that the reason they’ve not had sex in months is that “she used to take care of herself.”)  I can suspend disbelief with the best of them, but this pushes it.

In any case the movie itself is really a treat.  Fischer plays a woman who has, from the outside, a storybook life.  The popular, pretty cheerleader in high-school married the football star moved into a nice house and started a family.  Her parents consider her the pretty (not the smart) one.  In reality however her husband’s a dick, her son doesn’t respect her, her sister resents the hell out of her and her parents still treat her like a child.

As is often the case with movies worried more about telling a story than what a focus group might say the ending isn’t all that neat and may turn some people off.  This is a slice-of-life movie and you may not like where they decided to begin and end that slice.  There are other minor nits to pick and you definitely will not agree with all the choices made but that’s really part of the charm.

This is exactly the kind of small-budget, high-quality, performance-driven light-drama that independent channels produce so lovingly well.  Give it a chance and I don’t think you’ll be disappointed.