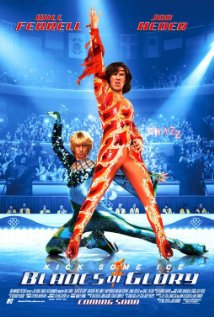 “Blades of Glory” on IMDB

I’m really surprised that this one slipped through the cracks for so long.  I do remember when it was being released and remember that “not good enough to pay theater prices for” feeling but then I completely lost track of it.

It was fun, all the more so because I happened to be in the right frame of mind for it.  Many of the gags totally childish and I could see easily see not liking it when in a different mindset.  Nearly all of the comedy fell into the tasteless slapstick category and I’d forgive anybody that held that against the movie.  Luckily enough I was in a stupid mood and actually belly-laughed at the many and varied dick jokes.

Also in its favor was Jenna Fischer [IMDB] in a small, but pivotal role.  I may have mentioned her before.  Once.  Or twice.  She can do no wrong and anybody that suggests otherwise is a god-damned liar!  She is great here as the long-suffering innocent amongst the spoiled and privileged villains.  She has definitely typecast herself as the quiet every-woman but she’s just so damn good at it.    She also has an extended scene in lingerie.  I’m just sayin’.

There’s actually very little to say about the movie overall.  If you’ve seen other Will Ferrell [IMDB] comedies (and chance are you have) then you already know what you need to know.  This one is neither better or worse than any of the others.  Quirky characters, lovingly crafted, and pratfalls are the rule of day.  That was just fine with me.