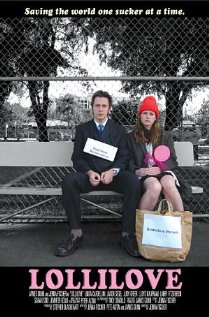 This ultra-low budget (the reported budget was $2000) mockumentary marks Jenna Fischer’s [IMDB] directorial debut.  I’ve said it before and I still stand by it: Jenna Fischer can do no wrong.  James Gunn [IMDB] can do wrong (unlike Jenna, he’s only human) but more often than not doesn’t.

Jenna and James are a hollywood power couple with more time and money than sense.  They decide to start a charity and after much deliberation decide that the best way to help (and incidentally for them to become famous) is to provide designer lollipops for the homeless.  The lollipops, with uplifting slogans and custom artwork by James on the wrapper, will (they hope) “make a real change in the homeless community.”

The satire is razor edged as we watch these oblivious nitwits inform the audience about homelessness and other social issues.  The vapid philanthropy is contrasted perfectly against their personal self-interest and aggrandisement.  What makes the humor work is that they honestly believe that this will help; that this – lollipops for the homeless – will truly make the world a better place.  These aren’t bad people but they are hilariously completely self-absorbed.

This is the definition of a pet project.  Fischer and Gunn, who were married at the time, filmed the movie in their house and neighborhood.  They used footage from their actual wedding, personal photography to flesh out the body of the film and clearly imposed on many famous friends for cameos.  The actual quality of the film is pretty poor (having clearly used consumer equipment) but it suits the tone very well.

The movie is only an hour-long but any longer and it would have run a real risk of outlasting its welcome.  While this can only really be considered as a hobby project it’s impressively well realized.  The message may strike close to the bone to some who play at charity but they probably deserve it.  I look forward to seeing more from Fischer.  The movie is free at Hulu.com so all it’ll cost you to check it out is some time and bandwidth.