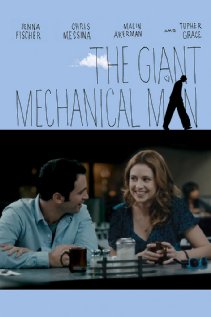 “The Giant Mechanical Man” on IMDB

Full disclosure: I love Jenna Fischer [IMDB].  Just love her to death.  She can do no wrong.  Any problems with this movie are somebody else’s fault.  That said there’s really not all that much wrong here.

It is a romantic comedy – with most of what that implies – but more what a romantic comedy should be rather than what they’ve become.  For starters it’s actually romantic: likable people looking for something more in their lives end up finding it.  Secondly, the people involved actually like each other when they meet.  None of that idiotic “opposites repel then attract” drivel that’s become a trademark of the disposable rom-com.

One quibble is the title.  This movie has Jenna Fischer in it (she plays Janice) so naming it after a different character is a mistake.  Instead of “The Giant Mechanical Man” it could have been “Janice and the Giant Mechanical Man” or just “Janice Does Things” or, with a few tweaks and a call to my non-existent agent, “Janice Meets a Fat Blogger and Settles Down”.

Another minor quibble is the ending.  Based on an overused misunderstanding it comes off a little trite.  It’s also a little abbreviated in that it relies a little too heavily on coincidence.  But it still ends the “way it should” so there’s really no harm done.  The story is just a shade on the slow side but a sharp script and excellent supporting cast keeps things interesting.

At the risk of repeating myself: this has Jenna Fischer in it – so you have to watch it.  Happily, you should also enjoy it quite a bit.  Unless you’re really damn broken inside you’ll like these people.  They seem real and friendly.  The kind of people who you’d like to have over for dinner or to watch a movie.  You’ll like seeing them fall in love.