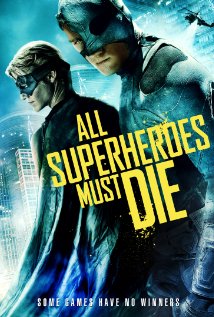 “All Superheroes Must Die” on IMDB

We’re going to give this one a lot of leeway for the sheer audacity of attempting to produce a superhero flick with a budget in the dozens of dollars.  Instead of, like everybody else, producing a shitty, derivative zombie movie these guys at least tried something different.  They get credit up front for that no matter what.

Four super heroes have been captured by their arch nemesis, stripped of their powers and placed in situations where they must risk their lives or sacrifice innocent lives.  The “stripped of their powers” bit ensures that we never need to suffer through (or waste any of the nearly nonexistent budget on) terrible special effects.  On the downside it also means that we never get to see any actual “super” hero-ing.

One major issue is that the overall setting is just too damn big.  It feels false as we wander from place to place across an entire town and never cross paths with another soul.  A more enclosed, controlled location would have been significantly easier to film and, more importantly, made much more sense.  Any of one of your basic abandoned warehouses, hospitals, office buildings or schools would have worked.  Granted the larger scale is needed for a specific reason but it’s a pretty silly reason and could have easily been dropped with a few tweaks.

The biggest issue, and the thing that really drives this one into the ground, is the inconsistency.  The script is all over the place.  It tosses ideas out left and right and most of them contradict one another.  For example, we learn one character, “The Wall”, is invulnerable.  When he first reunites with his friend, “Charge”, they shake hands; he winces and says “ouch”.  They determine that Charge still has his super-strength.  Later the Wall is injured and we’re told that he “doesn’t know what pain is”.  Even later, via flashbacks, we learn that these people were granted their powers in their late teens which, of course, would have given him nearly two decades to learn what pain was.

The script has a lot of these moments and the fair to terrible acting just can’t carry us past the flaws.  The really sad part is that a lot of ideas are actually good – or at least potentially good.  With more polish and a serious continuity review this could have had a real chance to rise above its budget.  As is it still gets credit for basic chutzpah but it sadly squanders it all by the end.