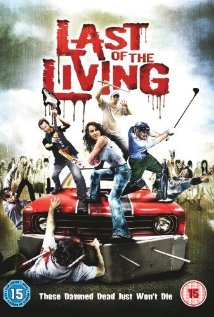 “Last of the Living” on IMDB

The fifth selection in our annual “Boiled Eggs and Brain Eaters” Easter zombie movie marathon.  Another zombie comedy and (by far) the lowest budget selection of the day.

Set in New Zealand this low-budget groaner follows three slacker friends that have survived the zombie apocalypse by sleeping in other people’s abandoned houses, drinking beer and watching DVDs.  (Apparently the New Zealand infrastructure is significantly better than the American one as the power grid is still happily active many months into the end of the world.)

The slackers meet a girl who needs help developing a cure for the zombie plague and while not trying to awkwardly seduce her attempt to help.  Of course things don’t always go as planned.

The (lack of) budget shows in every aspect of the production.  Some things (like the lack of guns) are explained (poorly) but others (like the super-high-tech “lab” that’s clearly a high-school classroom) are just presented without comment.  The zombie makeup consists of fake blood and eye-shadow and most “effects” are implied via quick take and off-camera impact – maybe a splash of fake blood here and there.

The script is clichéd and paint-by-numbers but does have a few high points however these are balanced by some mind-bogglingly stupid sequences.  The acting is quite a bit better than might be expected from the budget but comedic timing is sorely lacking and many otherwise promising gags fall flat.  Like most movies in this range the ending also makes the mistake of taking itself way too damn seriously.

While not good by any reasonable qualification the movie does have a certain undeniable charm.  Not enough charm to be worth it for a casual viewer but zombie aficionados shouldn’t regret wasting an evening on this too much.