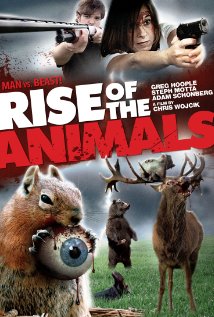 “Rise of the Animals” on IMDB

[This is the fourth review for this edition of  my semi-regular “my-wife-is-visiting-relatives-so-I’m-watching-loads-of-crappy-movies” film festival.]

It’s become a cliché to say “so bad that it’s good” but damn if it doesn’t fit sometimes.  The movie starts with a horrifyingly hilarious scene of a woman being attacked by her cat (presented as a mixture of stock footage and insanely awful puppetry) which ends with her stuffing Mr. Kitty into the garbage disposal.  It just gets better from there.

The only thing more hilariously bad than the puppetry is the CGI.  It’s terrible.  The animation from Miss Spider’s Sunny Patch Friends  is Oscar worthy compared to this.  It makes the The worst possible SyFy original movie work look like “Jurassic Park”.  This is a movie where a gorilla with a (red) mohawk has his hand chopped off by a car window.  This is movie where a bunch of turtles (chattering like beavers) attack a canoe.  But don’t take my word for it – the (clearly not at all baked) writer/director will mumble it to you himself in this YouTube promo:

See – how can you not want to watch this?  Admittedly you’ll never “like” this movie but if you’re willing to go with things a bit you will enjoy the hell out of it.  My son and I laughed-out-loud almost continuously and will almost certainly share (at least pieces) with friends.  Do yourself a favor, fill your house with people and watch this.  You may regret it, but you’ll never forget it.