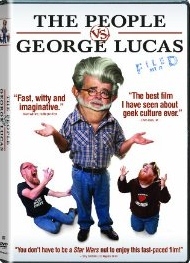 “The People vs George Lucas” on IMDB

[This is the fifth review for this edition of  my semi-regular “my-wife-is-visiting-relatives-so-I’m-watching-loads-of-crappy-movies” film festival.  Consider this a palette cleanser between the schlock.]

Fandom is a turbulent sea to try to set course on.  While the fervor of the fan base for other franchises (“Star Trek”, “Dr. Who”, etc) may be similar no other property has the specific traits that put “Star Wars” fans into such an abject tangle.  This film covers the “big questions” of Star Wars (and to a lesser extent, Indiana Jones) fandom and should be entertaining even to those that think their just a “silly kid’s movies”.

Although Lucas and other principles all declined to participate the whole project comes across as refreshingly balanced.  This isn’t polemic against Lucas by any means although it does become clear that those “against” him are both more passionate and more entertaining about it.

The film covers three main topics overall.  We begin with a discussion of the original films and the Lucas “improved” special editions.  The questions of whether a creator forever “owns” their work (even to the extent of trying to eliminate it should they want to) and what responsibility they might have to fans of that work are complex and difficult but well presented.  Who truly decides who shot first, Han or Greedo?  Do the fans have any real right to demand a re-release of the original films?

The second segment delves into the fan culture itself demonstrating both how seriously they take things and lavishing praise upon Lucas for his willingness to share original assets (and unwillingness to litigate on fan works).  We also spend some time with the just-as-passionate “Indiana Jones” fans.  For me this was most interesting segment overall.  Hearing these “superfans” impart their feelings of betrayal (or support) is powerful stuff.

The last segment covers the prequel films and the subsequent marketing deluge.  Jar Jar Binks is martyred in an extended crucifixtion which is balanced by a sweet segment of children praising him.  The movie doesn’t shy away from the sad truth: kids love these movies.  Are these movies even for fans of the original series?  Does a creator like Lucas owe fans “more of the same” or is he truly beholden only to his own creative vision?

Whether you’re passionate about these issues or not this is a fascinating glimpse into the world of obsessive fandom.  The sheer number of commentators – covering not only Star Wars but fandom in general, media ethics and related fields – coupled with insightful, intelligent questions makes this a treat to watch from beginning to end.   (Oh, if you’re wondering where my opinions lie: yes, of course Han shot first; the prequels sucked; Jar Jar is an abomination and sure, Lucas can do whatever he likes with his work – but I don’t have to like it.)