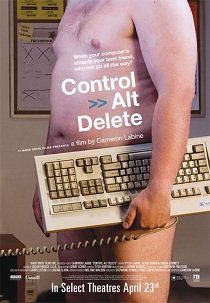 [The third and last movie in our unexpected Tyler Labine [IMDB] film festival.   After watching two in a row by accident, we decided to hit up our good friend NetFlix for others and this floated up.]

The movie tries to explore tech fetishism against a backdrop of Y2K debugging.  The movie is horrible at portraying technical issues and work.  I mean 1950’s sci-fi bad.  It’s not so-bad-it’s-laughable, it’s just bad.  They say things like “We couldn’t upload to the server because the HTML was formatted incorrectly” and “your bloated HTML is clogging up my T1 line.”  Of course there’s really no understanding that HTML just doesn’t have any Y2K issues (and especially not any that could destroy civilization as we know it).

Then again the movie is Canadian.  Maybe world-critical insurance software is written with HTML there?

Tyler Labine actually does as well as can be expected here (his brother Cameron wrote and directed – I blame him).  I was also very impressed with Sonja Bennett whom fans of most recent sci-fi (almost all of which is produced in Canada) should find familiar because she’s in basically everything but never seems to get meaningful roles.  They had nothing to work with but they did their best and it showed.

It’s never clear if the more ridiculous parts are just plain bad or really bad attempts at metaphor.  It doesn’t work as a commentary on the information age because it just can’t get any aspect of it right – in fact it plays more as a half-assed satire whenever it features technology.  The movie has some good ideas and clearly the best intentions but it’s just a muddled, muddled mess.  People that actually do fuck their computers may have to accept this as their anthem film, everybody else should stay away.