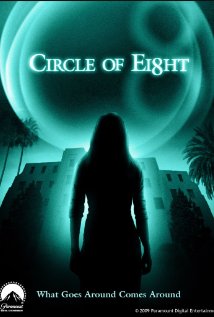 “Circle of Eight” on IMDB

I was a little put off when this started up and I discovered the production company was “Mountain Dew Green Label Studios”  About 20 minutes in we also get treated to some elaborate art created primarily with Mountain Dew.  Yes, this is a movie funded by soda pop and featuring soda pop.  (Although, to be fair, they really weren’t that heavy-handed about it.)

Weirdly enough it actually started out pretty well.  I was hooked enough to start paying attention and there were some decent willy-inducing moments.  It’s a bottle movie, taking place completely (with the minor exception of one flashback) in a creepy apartment building (called “The Dante” for those that really needed the purgatory theme nailed home even harder) populated by creepy tenants.  Jessica’s just moved in and very quickly starts to experience strangeness culminating in a murder spree that she may be the only one experiencing.

Sadly the longer it went on the less I cared.  When the big payoff finally came (and, it turns out, didn’t connect with fuck-all) all I could muster was indifference.  I won’t spoil the silly twist ending (and the insufferable, self-indulgent second ending), but once it becomes clear you too will ask:

This movie answers the question: “Is doing the same thing over and over again and expecting different results the definition of a bad movie” with a resounding “Yes.”  This might have actually made a passable episode of “The Outer Limits” or, with some polish to the script, even “The Twilight Zone”.  Put The Dante in “Silent Hill” and it might have made a fine subplot in one of the weaker games.  But as a feature-length thriller it just peters out into its silly ending long after you’ve ceased to care.