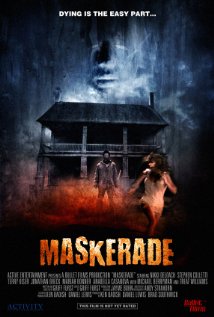 [Wife and kids are away on their last weekend jaunt before school starts so while I catch up on some mind-numbingly tedious work I’m distracting myself with bad movies.  This is the third.]

In what’s becoming a pretty clear omen this movie has one name in the credits and another (“Maskerade”) on the poster.  It might be that in this case a little multiple-personality disorder is appropriate.  The movie is actually fairly well done considering the budget but it’s terribly paint-by numbers.  Here are some of those numbers:

1) Boyfriend surprises his girlfriend with a proposal and a creepy abandoned old house.  They move in immediately and invite all their friends up to help fix it up.

2) Through flashbacks and an old man we learn that 50 years previous a mother, distraught at her son Leonard’s “my face is melting off” medical condition used voodoo sacrifices to try to heal him.  This, of course, only turns him into a monster that can’t be killed.

3) As friends go off to creepy old barns to have sex, or utility workers come to deal with the house or people just wander until they are brutally (but straightforwardly) killed off in such a manner that our heroine doesn’t notice until she’s the only one left.

4) The bandaged Michael Myers-wannabe monster kills people and – here’s the original part! – wears their torn-off faces.  (By the way – that’s only “the original part” if you’ve not seen “Texas Chainsaw Massacre”.)

5) The same old man, now finished with his job of telling everybody what’s going on, shows up to fight the monster and fails.

6) Our heroine fights the monster and wins!  Until…

7) … a twist ending that opens the door for a sequel.

This is as bog-standard as a slasher movie can get.  Leonard Tucker is Michael Myers and Jason Voorhees to the extent where the three of them could have wacky, “Patty Duke” style adventures as they seamlessly exchange roles with each other.  Leonard might agree to take the SATs for Jason while Michael fills in for him on a date and Jason, the only one home when the message came, is forced to play “Peter Pan” in the school play because Leonard isn’t available.  After some wacky misunderstandings it would all come out in the end and everybody would laugh until they were gruesomely decapitated.