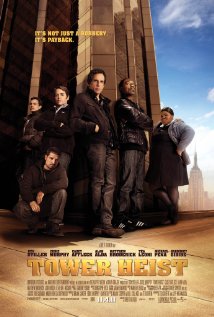 What do you when Alan Alda [IMDB] screws you (and I mean screws you bad)?  Well you put together a completely inept crew to break into one of the most secure buildings in the world and steal from him.  You know, people who mentioned that they might know how to do things or other people who you barely know and wouldn’t trust with your neighbor’s cat.  Those people.  Collect them into a room and tell them all about how you plan to steal 20 million dollars.

The movie starts out pretty well.  Not laugh-out-loud funny or anything, but well-paced and with a certain amount of charm.  Then we get into the heist itself and it all goes to hell.  The things that happen are just plain stupid – which might have been somewhat forgivable if they had been funny, but they’re not.

Basically the movie spends the last third treating the audience like they’re retarded.  It’s hard to speak intelligibly about it without spoiling it, but:

There was a lot of potential here but a slow start and an asinine finish ruin it.  It’s a shame because there was loads of talent here but it was all squandered for senseless pratfalls and physical gags.